Failure to properly plan the distribution of your pension/retirement accounts

A few years ago, two sons of a wealthy attorney inherited their widowed father's $1.3 million IRA in October. They were 23 and 25 years old and two checks for $650,000 were sent directly to the boys from the custodian, (a well known brokerage firm).

By Christmas the money was gone! On April 15th of the following year they each were presented with a tax bill of $260,000.

Impossible you say? Not so. Such an event like that happens all too often and can happen to you if you don't properly plan for the distribution of these untaxed accounts that are simply an IOU to the IRS.

How would you like to toil your entire life, build a sizeable estate with $2 million in your IRA that you had rolled over from the lump sum you received at retirement from General Mills, only to have Uncle Sam confiscate $1,400,000 of it at your death?

That's 70% gone forever! Nobody wants that, and yet, an alarming 80% of all "qualified" pension/IRA monies are transferred at death – and thus taxed – to named beneficiaries. That means only 20% of the nation's IRA monies are actually used as retirement income.

In other words, we build our fortune, set aside our IRA funds to provide a safety blanket for us just in case we need it, and then we usually don't touch it.

The problem is compounded by the fact that, because of investment gains, these retirement funds can grow to astronomical numbers. IRAs in excess of $4 million aren't rare these days.

Yet only a few investment advisors, accountants and stockbrokers know the art of extracting these funds, or how to pass them to the next generation without the government first tearing away the lion's share.

That's because most are not aware of what I call the:

The first three time bombs explode during our lifetime.

1. Income tax. Up to 40% of federal income tax (plus state tax where applicable) is levied on distributions made while we are alive.

2. The "too early" 10% tax. Distributions of taxable qualified assets before age 59½ are subject to an additional 10% excise tax intended to discourage spending tax-subsidized retirement savings before retirement.

3. The "too little, too late" or 50% penalty tax. A 50% penalty is imposed for a failure to distribute a minimum amount of qualified assets each year beginning at the participants required beginning date (April 1 following the year in which they turn 70 ½). This is known as the required minimum distribution (RMD).

4. Income in respect of a decedent (IRD). Accounts are taxed for income in respect of a decedent (IRD) if distributed to the named beneficiaries after the death of the participant. Before 2007, only a spouse was allowed to roll over the inherited retirement account into their own personal IRA. But now all beneficiaries can do the same (stretch) as long as they follow certain IRS guidelines that allow them to spread their inherited IRA over their lifetime.

5. Estate tax/death tax. If your combined net estate is valued more than the federal ($5.49 million) and state inheritance tax exclusions, your IRA funds will be subject to both income and estate taxes. 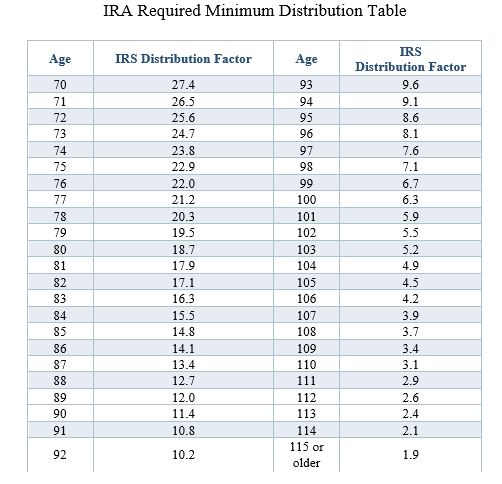 Spend it! That should be the first order of business. When you turn 70½, the government requires that you begin extracting required minimum distributions based on the published RMD table. (See table on Figure 1). If you fail to take your RMD, as previously stated, a tax bomb of 50% is imposed.

I love the bumper sticker on those massive RVs that reads, "Im driving my children's inheritance." That's the way it should be. But, if your investments do well, it can be very difficult to spend it fast enough.

When you add in other retirement income sources, such as social security, retirees can find it difficult to spend that kind of money and, as a result their estate keeps growing and the TAX TIME BOMBS keep on ticking. So what's the real solution? 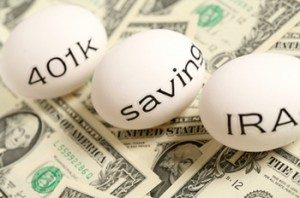 First, unless you have a prenuptial agreement, your spouse should always be the first in line as your primary beneficiary so he or she can roll the funds they inherit from you into their own IRA at your death.

If you are married, never name a Revocable Living Trust as the beneficiary or "To My Estate." In each situation, the surviving spouse may have to pay income tax in the year it is received.

Second, by virtue of recent tax law changes, distributions from a deceased taxpayer's IRA/401k to a non-spousal beneficiary can now be made in one of three options: 1) a single upfront lump sum, 2) spread over a five-year period, or 3) over the life expectancy of the non-spousal (children) beneficiary after rolling the inherited funds into separate new individual IRAs.

TAX ALERT: During the past few years Congress has been considering changing the rules of engagement with regard to the distribution of qualified funds (IRA, 403b, 401k), to non-spousal beneficiaries (children and grandchildren).

Considering the huge national debt and the fact that there is an estimated $16 trillion in IRA and retirement funds alone, Congress cannot continue to allow non-spousal beneficiaries the luxury of "Stretching" the distribution over their lifetime.

The federal government needs the tax revenue now. Several bills have recently been presented to Congress on this issue. You can expect that very soon Congress will pass a law to tax these accounts, when they are inherited, over a maximum of 5 years like it was prior to 2006. In this regard you need to plan for the worst and pray for the best.

What to do With Your RMD?

The vast majority of our clients suffer extreme pain and anxiety when receiving their IRA Required Minimum Distribution. They know it is coming but have done little to plan for it. Because many don't need it, when added to other sources of income, they consider their RMD a dreaded nuisance that shoves them into a higher tax bracket.

So what are your options when it comes to your IRA Required Minimum Distribution (RMD)? What should you do with it?

Based on the current federal gift tax laws, we can currently make an annual gift to anyone we want up to $14,000 without paying a transfer gift tax. A couple with one child could give $14,000 each or $28,000 combined.gifting income

A couple with five children and four grandchildren could gift $252,000 per year. Once the gift has been made, no future federal or state estate tax can ever be levied against the principle or the growth.

Rather than frivolously waste your RMD, why not leverage the annual mandatory allocation and the annual gift allowance to create a guaranteed tax-free magnified super charged cash account for your beneficiaries?

Let me give you an example: RMD Leverage Strategy Example – George and Sara George and Sara, both age 71, are in relatively good health. George's IRA is valued at $1,000,000.

George and Sara have one son, Steve, and three grandchildren ages 11, 13 and 15. They would like to establish a TAX-FREE leveraged inheritance for their grandchildren that would be there to help them with life.

Even though George's RMD factor will most likely increase each year, they decide to transfer (gift) the same amount, $27,372 annually to Steven. But rather than giving him the cash outright to needlessly spend, they secure a $1,521,471 Joint & Survivor (JLS) life insurance policy through our firm on their lives for the benefit of their grandchildren.

When the surviving spouse passes away, the life insurance company guarantees that they will send three separate checks to each grandchild for $507,157 totally income and estate Tax-Free.

The grandchildren will be able to use their share of their guaranteed inheritance to pay taxes, for their education, make a down payment on a home, pay for medical expenses, pay for their children's education, generate a lifetime income stream, or for any purpose you can think of.

As an option, the RMD Leverage policy could be placed inside a Family Dynasty Trust to ensure the proceeds are always distributed as you wish. You could even include distribution qualifications rules, such as being free from substance abuse for a period of time, etc.

Because George and Sara were married, the use of a Joint and Survivor – JLS (Second-to-Die) policy was the most economical approach, creating maximum leverage. Of course, if you are single, or one spouse is in poor health you can create comparable leverage with an individual permanent life insurance policy.

The most important estate planning document is the beneficiary form for your "qualified accounts." Make certain that it is up to date and that your custodian has clear instructions on where and how the funds are to be distributed.

Never lose focus that when money is taken, by choice or by force, taxes will eventually have to be paid. Furthermore, when possible, you should leverage a tiny fraction of your account today and acquire a permanent life insurance policy that will provide guaranteed cash in the future to cover that tax bill for pennies on the dollar.