Bob Carlson's - The War on Stretch IRAs is Back

The War on Stretch IRAs is Back

There long has been a group in Congress determined to end the Stretch IRA, and this year they seem intent to have their way. I’ve reported in the past few years that many in Washington were targeting the Stretch IRA. The Obama administration called for an end to this valuable estate planning tool in its annual budgets. A bipartisan group in Congress agreed, and it appears that group is growing.

Their latest vehicles are two retirement bills working their way through Congress. The version in the House of Representatives is called “Setting Every Community Up for Retirement Enhancement” (the SECURE Act). The Senate version is titled “Retirement Enhancement and Savings Act” (RESA). The bills have a number of provisions, many beneficial to retirees and pre-retirees.

One goal is to give more workers, especially small business employees, access to employer retirement plans. Small businesses would receive a credit of up to $500 annually to defray the start-up costs of some retirement plans. Also, long-time part-time workers would be allowed to contribute to their employers’ plans.

Groups of unrelated employers would be allowed to band together to offer retirement plans to their employees, known as multiemployer plans. This should make the plans less expensive so more small employers can offer them. Currently, employers must have a common bond, such as being in the same industry, to form a multiemployer plan.

Also, required minimum distributions wouldn’t begin until age 72 for most individuals, instead of the current 70½. But Congress has to find a way to pay for these benefits. The main way to pay for them is to sharply curtail the Stretch IRA. The Stretch IRA isn’t a special type of account. Instead, it is a series of actions and strategies that allow beneficiaries of an IRA to maximize its tax-deferred compounding, making it last for years or even decades after they inherit it. 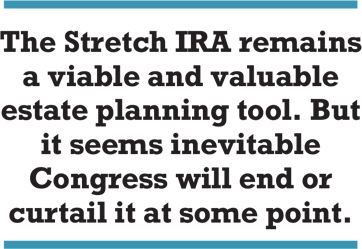 The Senate and House bills have different limits on the Stretch IRA. The House would require beneficiaries to fully distribute inherited IRAs within 10 years. There would be exceptions for surviving spouses and minor children. The Senate version would allow the full Stretch IRA but only for the first $450,000 per IRA owner. The rest of an inherited IRA would have to be distributed to the beneficiary and taxed.

A version of the two bills is expected to become law, probably this year. The basics of the bills have strong support in both parties, and the House version already has made it through committee and could be voted on by the full House soon.

It is too early to know which limit on the Stretch IRA will be enacted. It is even possible neither will pass. A version appeared in early drafts of the Tax Cuts and Jobs Act enacted in 2017, but the Stretch IRA provision was dropped from the final bill. Congress has changed since 2017. For the provisions to be dropped again, Congress would have to find another way to raise revenue to pay for the benefits in the bills.Many members of Congress have been following the growing retirement plan balances of the Baby Boomers for decades. Federal budget planning anticipates this money being distributed from the plans in the coming years and boosting federal tax revenue. The attack on the Stretch IRA is to ensure the federal government receives taxes on IRA balances during the Baby Boomers’ lifetimes. Many in Congress don’t want that money left in IRAs to be trickled out over the lifetimes of the Boomers’ children.

The Stretch IRA remains a viable and valuable estate planning tool. But it seems inevitable Congress will end or curtail it at some point. Next month we’ll discuss strategies that can ensure your IRA balance benefits your heirs for decades, regardless of what Congress does with these bills.

The Bombshell Battle Plan: How to Defend Against the IRS' Secret Weapon

The Future of Retirement Savings