Bob Carlson's - When to Replace Bonds with Annuities

When to Replace Bonds with Annuities

Evidence continues to accumulate in favor of including the right kinds of annuities in your portfolio. Annuities have a bad rap in much of the financial media. Some of that’s deserved, because there are annuities that are complicated, charge high fees and have a lot of restrictions. There also are annuities that are sold to the wrong people. The right annuity, however, will increase your financial security and portfolio returns.

In the past, I’ve recommended immediate annuities and deferred income annuities (DIAs, also known as longevity annuities) for retirees. They provide protection against low investment returns and living a long time. People who aren’t retired and are still saving for the future should consider replacing bonds in their portfolios with fixed annuities or fixed indexed annuities.

There are several reasons you might want to reduce the percentage of your portfolio invested in bonds and bond funds in the coming years. Interest rates remain very low, despite the increases since late 2017. The best likely result over the next 10 years is earning the current yield on bonds, which is 3% or less. But returns could be worse. If interest rates continue to rise, the value of bonds and bond funds will decline. A recession also will cause losses in high-yield bonds and even some investment-grade bonds.

There are two types of fixed annuities. The most common is the Multi-Year Guaranteed Annuity (MYGA). The MYGA locks in a fixed rate for the term you select, usually five to 10 years. The interest you earn grows and compounds tax-deferred within the annuity. One of the top-paying MYGAs is paying 3.6% for five years. So if you started with $100,000, at the end of the five years the annuity value would be $119,343. The big advantage of an MYGA is a stated predictable return.

In the other type of fixed annuity, the interest rate changes each year. Usually the year’s interest rate is set by the insurer based on current interest rates and the insurer’s costs. The yield usually is similar to what is earned by intermediate corporate bonds, but it can be higher or lower depending on the insurer.

Many FIAs also have an annual cap. No matter how much the index increases, the interest credit won’t exceed the cap. For example, suppose the same FIA has a 10% cap. If the index rises 20%, 80% of that would be 16%. But because of the cap, an account will receive a 10% interest credit. Other factors in the annuity contract also might reduce interest credits, such as spreads, margins and expenses. FIAs also have a minimum guaranteed return. For many of them today, the minimum return is 0%. FIAs can be complicated. See our July 2014 issue for more details on how to evaluate them. 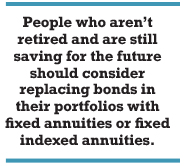 In the past, I’ve recommended considering annuities instead of bonds in pre-retirement portfolios, especially when interest rates are expected to rise. New support for that recommendation comes from a study by Roger Ibbotson, a professor emeritus of finance at Yale University and along-respected investment researcher. Ibbotson’s latest research concludes that uncapped FIAs would have outperformed bonds on an annualized basis for the past 90 years. He’s also concerned about interest rates over the next 10 years or so and believes bonds won’t deliver the returns most investors need to fund their retirements. So, Ibbotson joins me in recommending that you consider replacing some bond positions with annuities. I asked my annuity expert, Todd Phillips of Phillips Financial Services, 888-892-1102, to survey the annuity market and recommend some fixed annuities and FIAs for you to consider, restricting them to insurers with solid financial safety ratings. You can see details of Todd’s favorites in the tables on page 9.

The MYGAs pretty much speak for themselves. The longer you’re willing to lock up your money in a MYGA, the higher the guaranteed annual yield. If you don’t want to lock up your money that long or expect to earn a higher yield as rates rise in the next few years, consider a fixed annuity with annual interest resets. These currently pay a little under 3%. When you’re ready to buy, Todd can search the market for you. The FIAs are more complicated but offer the potential for a higher interest rate. 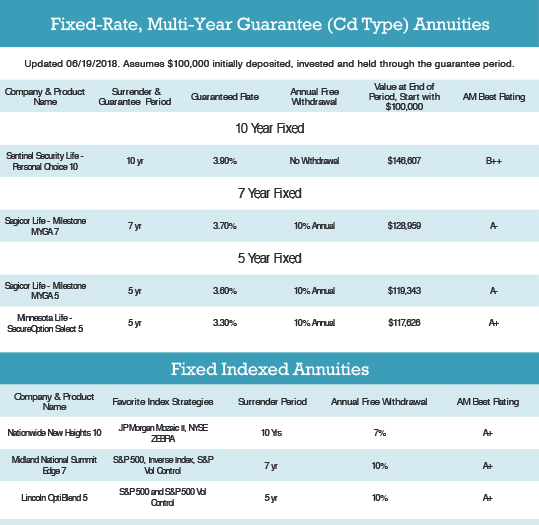 Ways to Use FIAs

This is just one way this FIA can be used. The other FIAs also let you choose from among a number of indexes and combine them. FIAs obviously can be complicated. They’re not alternatives to investing in stocks. But FIAs can be good choices for an investor who wants the opportunity to earn more interest than bonds are likely to deliver while keeping the principal secure.

Remember, fixed annuities and FIAs are for people who still are in the accumulation years and want diversification in their portfolios. People who already are retired and want guaranteed lifetime income should consider immediate annuities and deferred income annuities.

The Bombshell Battle Plan: How to Defend Against the IRS' Secret Weapon

The Future of Retirement Savings